Ninety Nine Percent for Art New
Opening reception 7pm Thursday February 9th 2012
To be opened by Dr. Patrick Collins of the National University of Ireland, Galway. Refreshments provided by Kai Cafe + Restaurant.
The Shed will be open Friday – Sunday, 1 – 6pm or by appointment 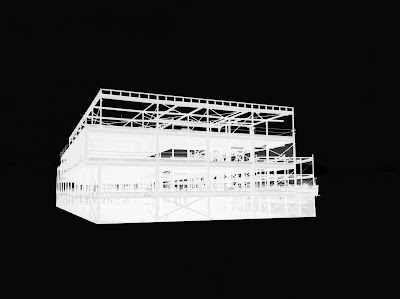 Ninety Nine Percent for Art is a two person exhibition by Carol Anne Connolly (IRL) and Jim Ricks (US). The artists are producing new work in an array of contemporary media spanning from sculpture, video and painting to photographic works. Their interest lies in what they describe as ‘unintended monuments’. The title is drawn from protest movements and state sponsored public art policy, in doing so the artists hope to enshrine the unofficial, even accidental, signs of our times. The Galway Harbour Company has generously allowed the artists to use a large 4,000 square foot warehouse space located on the middle pier of the Galway Docks for this exhibition.


Ninety Nine Percent for Art investigates what are essentially undiscovered and unplanned memorials. A careful artistic selection process which groups symbolic markers ranging from the detritus of impromptu revolutionary celebrations to unfinished industrial sites creates a new discourse on the built environment. Ninety Nine Percent for Art rethinks the memorial in a time of economic and political upheaval using national and global examples and how they relate to each other. The artists begin a process of challenging conventional notions of monuments, as they ‘unearth’ unintentional and colloquial artifacts as the source material for their artworks. In this process they reference various structures or embellishments that speak of inextricably linked approaches and struggles.


Carol Anne Connolly is a contemporary visual artist and arts organiser from Ireland. She recently completed her MA in Arts Policy and Practice through the Huston School of Film and Digital Media at the National University of Ireland, Galway and graduated from NCAD with an honours degree in Fine Art (2006). Connolly worked as Art Director and curator of Mantua Arts project, a rural-based artist- led gallery and residential studios in Co. Roscommon from 2006-08. Recent exhibitions include The Periodical Review at Pallas Projects, Dublin, Transforming Ireland at Eight, Galway, Alter / Native at the Boyle Arts Festival and Notions of Capital, the Dock, Carrick-on-Shannon.


Jim Ricks was born in California and currently resides in Ireland. He earned his MFA from the National University of Ireland, Galway/Burren College of Art programme and received his BFA from the California College of the Arts. Ricks is currently working on the touring public collaboration In Search of the Truth (The Truth Booth) and recently curated a show in San Francisco titled Death and Sensuality as part of the Imagine Ireland initiative. Ricks has also shown the touring public work Poulnabrone Bouncy Dolmen and had recent solo shows at Peanut Gallery (Chicago), Fort Dunree (Co. Donegal), Occupy Space (Limerick) and Pallas Contemporary Projects (Dublin). His work deals with property rights, borders, ownership, commodity, institutions and publics. He uses synchronicity, imitation and appropriation as a vehicle to explore these ideas. By openly imitating art and life through available means and materials he explores the grey area between flattery and theft, while re-wiring history into a new narrative. Ricks’ work is influenced by his background as a prolific graffiti artist and a political activist.